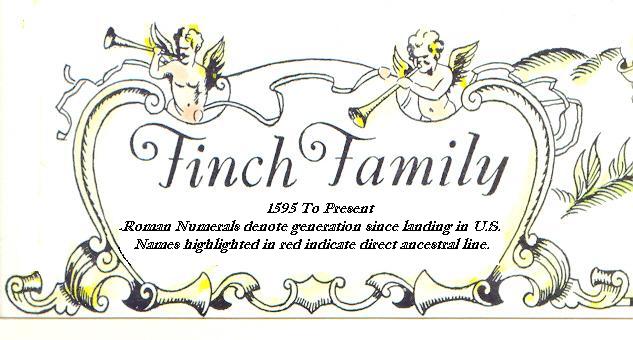 Our particular branch of the Finch family has been successfully traced back to the birth of  John Finch, who left his native England in search of a new life, setting sail for a America in 1630.

A tremendous amount of  appreciation is extended to Ora F. Finch and Charles L. Finch, who, without the benefit of modern means, researched and created our first "Finch Family Tree".  That original document was published in the Indianapolis News, October 3, 1920, and has been amended over the years to include genealogical data spanning dates 1595 to 2005.  The information passed down from Ora and Charles Finch has proved indispensable with respect to continued research of our family's history, and it is only through  their individual contributions that a more complete record has now been created.

This site is dedicated in memory of my parents: Richard Bird Finch and Wanda Ruth Dennison Finch,
to my sisters, Leslie Ann, Lisa Lee and Linda Dennison Finch and the many kindred spirits of the
FINCH family.

May we be thoughtful students of those who have been, thoughtful teachers of those who are yet to be,
and ever mindful of the importance of leaving this world a little nicer than we found it.

icons below to contact individuals who may be researching a common ancestor.

Read the Finch Family Message Board

( I ) John Finch (1595 - 1657)
|
Born 1595 in Essex (?), England.
[Believed to be the son of Abraham Finch, and brother of Abraham Jr. and Daniel Finch.]
John Finch came to America in June / July 1630, arriving in Salem, Massachusetts aboard a vessel
of the Winthrop Fleet, and led by the flagship, "Arbella".  Traveling with John Finch, during this
"Great Emigration" was his father, Abraham Sr., and brothers,  Abraham Jr., and Daniel.
In 1630, this Finch family group settled in Watertown, Massachusetts where, (per Governor Winthrop),
Abraham Sr.'s wigwam and worldly goods were destroyed by fire in September of that year.
By 1634, having taken the oath and become "Freemen", Abraham Finch Sr., Abraham Jr. and Daniel
Finch relocated to Wethersfield, Connecticut, where each took up residence on the east side of Broad
Street.  It is unclear whether John Finch ever owned property in Wethersfield, CT., though he certainly
did in Stamford, which was then considered a colony of Wethersfield.
Abraham Sr., commonly known as "Ould Finch", took up residence just south of Thomas Olcott, of
Hartford, CT.  Near Abraham Sr.'s homestead was that of son, Daniel Finch who was appointed
Wethersfield's first constable in 1631.  Just north of Daniel's residence, was the home of Abraham Jr.
Abraham Finch Jr. was killed October 30, 1637 in the Wethersfield Massacre by Massutunck
(alias Nepaupuck), a Pequot War Chief.  Nepaupuck was tried, convicted and on October 29,
1639, beheaded  for the murder of Abraham Finch Jr., a Swaine family daughter "and others".
At the time of his death, Abraham Finch Jr. had a wife, Dorothy (Moulton) and a son also named
Abraham.  Young Abraham Finch (III) was soon after adopted by his grandfather, Abraham Sr. and
eventually inherited his father Abraham Jr.'s 10 acres of land on Broad Street.
(Will administered in September of 1840.)

As for what we know of John Finch....
"November 7, 1632, at Boston, John Finch fined for wanting Arms for his man and for being
absent himself from training." [Militia]
John's first wife (name?) died before 1634, sometime after the birth of their child (John Finch Jr.)
See record of marriages Online:
John Finch married his 2nd wife, Martha Brett in 1634 - Watertown, Middlesex Co., Massachusetts.
Martha was born in England, and alleged to have arrived in 1630 aboard the "Arbella".
" John was a proprietor of Watertown in 1636-38, being granted 4 acres on February 26, 1636,
4 more acres on February 26, 1637 and 91 acres April 1638."
By 1642 John Finch was living in Stamford, Connecticut where he was assigned 6 acres of marsh and
upland and served in the Stamford Train Band" [Militia].
John Finch died September 5, 1657, (age 62) Fairfield County - Stamford, Connecticut.
"The inventory of his estate was filed in Stamford February 9, 1658, and found him with a net
estate of only 23 pounds."
See:
"History of Ancient Wethersfield" (p.66-67 and 268-269)
"Finch and Ashley: American Frontiersmen 1630-1977"
Wethersfield Historical Society
The Winthrop Society

Children Of ( I ) John Finch

( IV ) Isaac Finch  (1696 - 1748 / 49)
Born September 16, 1696 in Fairfield, Connecticut
BAPTISM: 13 Sep. 1696, Christ Church - Fairfield, Fairfield County, Connecticut.
Married Martha (?) in (?) Martha was born approx. 1703.
Owned 100 acres at Wawayanda, Orange County New York on the Monhagen Creek.
Historical Note: July 27, 1721, deed setting aside land for location of a blacksmith shop
signed by Isaac Finch and others.
Built the first flower and saw mill in the settlement.
It is said that Isaac Finch suffered from debilitating lung disease, which left him
an invalid from around the time his daughter Hannah was born (1732).
Isaac Finch died in Goshen, Orange County New York  between June 15th 1748
(the date his will was drawn) and April 18, 1749 (the date his will was probated)
(age 52-53).
Skip to the Children of Isaac Finch and Martha

5. Others (as documented in Finch Family Tree)

1. ( V ) Isaac Finch (1720s - 1790 ? )
American Revolution           Born between 1720 and 1727 in Goshen, Orange County,
New York.
Married Amy Kinney, who was born April 17, 1742.
Amy Kinney died (?).
Lived in the Pittston District,  Luzerne County, Pennsylvania.
July 14, 1777, Isaac Finch purchased a mill seat on the
Lackawanna River, from a committee of proprietors consisting
of Abraham Harding, Daniel Cass and Isaiah Halstead.  (The
purchase amount was £130.)  On February 12, 1790 a portion
of this same land was sold by Isaac Finch to Dr, William Hooker
Smith, witnessed by Jesse Gardner and John Davidson.
On July 3, 1778, at the time of the Wyoming Valley Massacre,
Isaac Finch and family were said to have been in Pittston Fort
(also known as "Fort Brown") which was located on the east
side of the Susquehanna river.
Per page 79 of "Historical Map of PA.", (published in 1875)
Captain Jeremiah Blanchard commanded at Fort Brown where
Isaac Finch was listed (among others) as an inmate.  This account
negates claims that Isaac was in Forty Fort, (on the west side of
the Susquehanna river), during the battle.
It is further believed that following the battle, Isaac Finch and
family retreated to Orange County New York, where they took
shelter with relatives residing there.
On the day of the Wyoming Valley Massacre, Isaac Finch was
considered a "defender" of Fort Brown, which according to
DAR standards, qualifies him as having performed "Patriotic
Service", though not "Military Service".  In addition, after having
relocated to New York, Isaac Finch is said to have provided
monetary donations toward the war effort, which by DAR
standards, also qualifies as an act of "Patriotic Service".
Isaac Finch is believed to have died abt. 1790 in Wyoming
Valley, Pittston Township, Luzerne County, PA.
Quit claim dated February 16, 1790, deeds a portion of
(deceased) Isaac Finch's mill seat from Samuel Finch of Kingston,
Luzerne Co.,